War Without End League: the Recusant 113th gets it in the neck 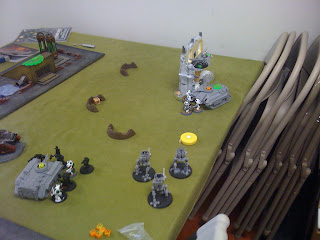 For a few minutes there I was worried I was going to get tabled, but in the end my Traitor Guard did better than I thought they would have, and held on until the bitter end when Chris Genest's Deathwing list snatched the only objective out of 4 on the board by burning the remnants of one of my Veteran squads off of it with an extreme-range, non-scattering plasma cannon shot from his sleepy Venerable Dreadnought (who almost snoozed through the whole game, only arriving on turn 4).

But lets not put the cart before the horse. We rolled the Seize and Hold mission and the 'Dawn of War' deployment style, and Chris wisely chose to go second and keep his HQ and 2 Troops units (Belial and two squads of Deathwing Terminators) in reserve for a Deathwing Assault in turn 1. So deprived of anything to shoot at, my two Chimeras full of Veterans popped smoke and loitered near my edge of the board, while my command squad went to ground in the second floor of a ruin near my right-hand corner.

Chris then teleported his two squads of Terminators in close to my board edge, using the Assault Cannon-armed squad to hose down that ruined building, killing 3 members of my command squad and wounding my Commander.

I got fairly lucky on my reserve rolls for turn two, getting my Autocannon-armed chicken walkers, my explosive-lance armed Rough Riders, and a Penal Legion unit that I wound up criminally underusing by hiding behind a wall and only firing once in the game (NB: if you're going to have a cheap scoring unit, you need to either score with the damned thing or fling it into combat, not have it sit on its collective thumb all game). At this point I got a real taste for just how ludicrously survivable Terminators can be. Shoot 'em with whatever you want - either they get their 2+ armor save or their 5+ invulnerable save. Plus Chris was running a (wonderfully converted!) Terminator Apothecary, which means one that I could have killed with a lucky autocannon shot got to ignore that wound instead. Also, whatever I should be doing with my Rough Riders, slamming them into a CC-tooled Terminator unit probably isn't it. Maybe throwing them at the shooty squad would have been the better choice. As it was, they all got slashed to bits by Belial and the other Lightning Claw-armed members of termie unit #1. Grr...

Chris's only other unit in reserve, the Dread, failed to arrive this turn. So he made hay instead by pranging one of my Chimeras and killing like half the dudes inside in the resultant explosion (at some point his CC Termies did the same thing to my other Chimera, but I'm a bit uncertain as to whether it was this turn or the next one).

Turn 3, I brought my second HQ - a Primaris Psyker (reskinned as a Chaos Sorcerer in my Traitor Guard theme) and the lovely, lovely Leman Russ. Whatever else I've decided, I think the main thing I've learned is that my next 250 points are going for a 2nd Leman Russ and 55 points of who the hell cares, because the LR is gold. If I'd been smarter and deployed it further off to one side or another I could have really capitalized on it; even so I think it accounted for all but 2 of the 9 Termie kills I got in this game. It did much better than the sorcerer, who promptly rolled boxcars on his Psychic test and ate his own brain rather than dropping some lightning on the shooty Termie squad like I'd hoped. Still, between the lone survivor of my command Lascannon team and the rapidly backpedaling survivors of the plasmagunner Vetsquad, I think I got two Termie kills on the shooter group. Meanwhile, the CC Termies with Belial started soaking up Leman Russ fire. I'm a bit hazy on who died when, but I know that by their assault next phase this unit was down to 3 or 4 men instead of the 6 it started with.

So lets move on to that. In a really smart move, Chris launched this unit into contact with my Sentinels - which meant that since the Sentinels were walkers, he was locked in combat, and therefore untargetable by the thundering guns of my LR. Curse the craftiness of the Deathwing! Plus he was able to aim his charge so one of his Thunder Hammer termies was knocking on the sides of my LR. Fortunately he never got through the armor on the Leman Russ. One of the Sentinels went boom, but who cared. At this point I'd have been happier if he'd killed all 3 immediately, since I'd have had an extra turn to shoot him up.

We were starting to run out of actual real-world gaming time by this point, so I'm a bit hazier on what happened and when. Suffice it to say that my other two Sentinels got Luke Skywalkered to death, the LR pounded his CC Termies down to just one, and Chris ran his shooty Termies towards the midfield objective. His Dread showed up and cranked a shot at my LR that bounced off the armor; this was clearly just a ranging shot however, as the next (and final) turn he wasted 6 of my 7 Veterans off their objective, leaving one guy armed only with a lasgun and harsh language to try and fend off the Master of the Deathwing. That didn't happen, and while his other squad didn't make it to their objective due to a mediocre 'run' roll, Chris's destruction of my Veteran unit was enough to claim the one and only objective anyone held at the (slightly early) game's end.

Scattered highlights from the game for me include the moment when Chris saved against two meltagun hits from the dwindling remnants of my melta-Vet squad, but lost a terminator to their buddy and his lasgun (aka 'flashlight). I also can look back now and see a few things I should have done differently, as well as a few things I just plain old forgot about (ie using any of my Company Commander's 'Orders' to bolster my shooting). Still, it was a fun game all in all; Chris was a friendly and helpful opponent, who was able to put up with my slight unfamiliarity with the rules and helped me to remember stuff that slipped my mind. So a loss, but a good game; and that's what it's all about anyway, right?
Posted by Ken Coble at 12:51 AM