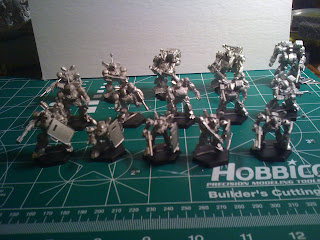 Everyone for a planned 1000TV list except for two convict GP cadres (or maybe one convict GP cadre and two platoons of convict infantry, I'm still trying to decide). They're not primed yet obviously, so I'm putting these pics up for one main reason: to force myself to locate my little point&shoot digital camera which I have misplaced somewhere in the house after my last vacation. The iPhone pics are just brutal. Having to look at them will (hopefully) make me get off my butt and find the little digicam, or maybe even invest in a decent camera and a book on how to do less sucky minis photos. My theme for this army is lots of the crappy old gears the MILICIA gets stuck with, and a hard core of half-tame war criminals and disposable convicts barely held in check by the MP cadre. Typical Southern dirty tricks/deniable ops/'kick murder' group. I love 'em. 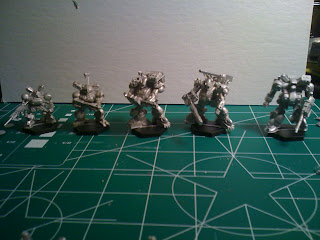 My Fire Support Cadre - the firepower of the list. A Command Jager with Medium Rifle upgrade, a Silverscale spotter/FO gear, two Spitting Cobras (normal and Support variants), and a Python. The Support Cobra might be my favorite single mini in the HG universe, toting that "Junglemower" Very Heavy Autocannon. If you didn't love "Ol' Painless" in Predator you'll never understand. 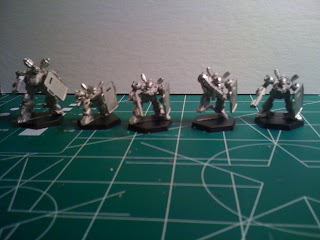 The MP Cadre - the first box of HG minis I ever bought. If the Spit is my fave single, these guys are my favorite album. Giant shotguns and riot shields? Yes please. I'm trying to decide if there's any way I can cleanly paint "OBEY" on their shields instead of the more traditional "MP" label. The Black Mamba MP is the army commander, and two of the Iguana MPs have light autocannon and grenades instead of the traditional street howitzer. The one thing I found out at the recent refresher game was that this unit is emphatically NOT good at tankhunting. 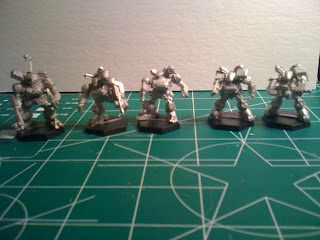 And my war-crimey GP squad. My concept was that while the MILICIA had a place for convict cannon fodder, there was also a place for more motivated offenders in a unit like this. A Silverscale for a second FO gear, two Flammjagers for burning stuff, and a brace of Dartjagers, one with a light bazooka and the other with a 'paratroop gun' (a light autocannon with an underslung light grenade launcher). When you need people to do the kind of stuff you can't get the admittedly fairly amoral regular MILICIA to do, these are the guys you call. Kind of a 'Dirty Dozen' thing, except these guys are all like the Telly Savalas character....

EDIT TO ADD: the smaller of the two convict GP cadres is built now. Just waiting to get in 4 Stripped-Down Jagers for the last one. Pix to follow.
Posted by Ken Coble at 1:36 AM