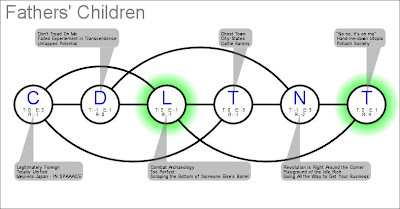 COMBINE (T:0, E:2, R:-1)
We called it Combine, after the generations of strife were over and we were all finally in agreement on everything important.

Now able to look outward after centuries looking in, we began to re-explore our system. Finding remnants of our former glory didn't surprise us - but finding the Slipstream beacons of the Fallen Ones did.

Their hubris destroyed them, and their children are too enervated, or too corrupt, or too complacent, to do anything more than play with their dead Fathers' abandoned toys - the same toys that killed them.

We won't make their mistakes. We learned their foreign tongue, are learning to eat their poison food, but we'll find our own way up the ladder. When we climb to the final rung, we won't be indebted to these vultures.

DESERET (T:-1, E:1, R:0)
The people of Deseret are... different. Mostly, they look human, but subtle differences make others feel on edge when looking at them directly. A lifespan of 200 to 300 years is one difference, but an extremely low birthrate (caused by 1 in 3 females being infertile) limits population. Life, at least of others of "The Chosen" (as they call themselves) is precious. The Chosen are unified by a benevolent theocracy, who worship and revere the Fathers in a constant plea that they return and take their left-behind children with them into Forever. In the meantime, though, they jealously protect their world from all others... with atomic force if necessary.

LORD CARNAVON (T:2, E:-1, R:-1)
It seems nice enough. Air's alright, suns aren't too bright (a little heavy in the UV spectrum, but nothing a little melanin tweak can't handle). It's got a slightly different version of the same ecosystem all Fathers' Kids have (not like those left-handed freaks from Combine). And the house they left - even when the household AIs followed the Fathers into Forever, the walls and floors and furniture and everything still work perfectly; still change themselves to stuff you didn't know you wanted them to change into, but damn if they don't guess right, every time.

Maybe that's why it's so horrible here.

Smart Diggers don't squat in the Old Manses. Smart Diggers truck in their own food, too. Smart Diggers wear blinders and earphones and nose filters, and basically do everything they can to stay as seperated from this place as they can.

Poke around, try and find something useful, then drug yourself to sleep every night until you can buy your way back offworld.

THE LESTER STRAND (T:0, E:-3, R:-1)
The Strand is the used up, burned out system used by the Fathers to fuel their society. Now it's controlled by warring families who have their hands in all aspects of life here. Nothing happens without their blessing or knowledge. Rules don't apply here. Lack of indigenous food sources have forced the Families to become the black market/money-laundering system of the Cluster. You can get anything here, but it will cost you.

NEW EDEN™ (T:-1, E:3, R-2)
A trio of paradise worlds orbiting a glorious yellow star. The worlds themselves are the result of precise terraforming by the Fathers, but are now each controlled by competing corporations out to exploit the natural resources, both human and otherwise, to turn a profit. Life is cheap here, unless you are an executive in a corporation or a visitor at one of the resorts. The population grows weary of this exploitation, but currently lack the leadership and coordination to do anything. For now, visitors see only the pretty face of New Eden™, which promises to do anything, and they do mean anything, to keep their business.

TELLOS (T:2, E:1, R:4)
"Nothing is too good for my guests." This is the philosophy of Tellosian culture. Blessed with an unlimited supply of everything and wanting nothing, they have developed a society where humility is the ultimate hubris.

This is the world where the Refusers came after the Fathers went into Forever. Technology has collapsed some from the Fathers' level due to the sheer abundance. Drive has left the Tellosians and they exist to please. Society is paralyzed.
Posted by Ken Coble at 3:47 PM