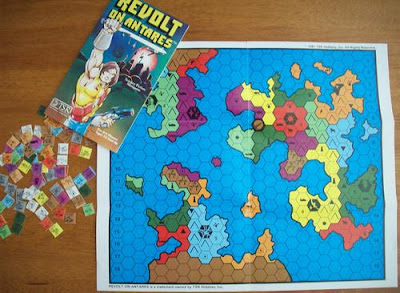 The very first 'gaming' product I ever bought was the old TSR mini-game "Revolt on Antares." While my first copy is lost somewhere in the attic or something, I grabbed a fresh copy off eBay a few years ago and have fallen in love with the setting all over again. I've made a few half-hearted attempts at figuring out some way to do some gaming in the setting - either RP, or once I stumbled into the wonderful world of 15mm sci-fi minis, tabletop wargaming. Nothing has ever really seemed to click, but I think Diaspora's version of FATE (plus its integral wargaming ruleset!) might be the way to go. I'm going to hammer away at this some here as well as on the Diaspora mailing list, and I'm actively soliciting feedback, suggestions, or just commentary on the process. I think one of the main strengths of this approach will be the player 'buy-in' as they'll be actively involved in detailing the setting, which was one of the neatest moments in our first Diaspora session.

For people who never played the original "Revolt," the bare-bones version of the backstory is that Antares 9 is on the edge of the (presumably crumbling and decadent) Terran Empire; seven noble houses, descended from the first wave of human colonists, are fighting for power and control of the planet. The leaders of each house have some fantastic over-the-top psionic ability (teleportation, electrokinesis, telepathy - a different one for each house), and each house also has some artifact of unreproducible Precursor god-tech. In the basic scenario for the original game, some of the houses revolt against Terran rule, some remain loyal, and the others get recruited into one side or the other as the game goes on. Other wrinkles in the setting include a lot of off-world (some frankly alien) mercenaries;. the (again presumably) oppressed native population of Antares 9; and gribbly tentacled alien invaders (that show up in the second scenario, but I'd certainly want to include them in my conversion).

One of the reasons I'm thinking Diaspora will be a great fit for this is that rather than sitting down and doing all sorts of background work for all seven houses and hoping that I'm brilliant enough to capture the imaginations of the rest of the players, I can hack the Cluster creation rules and let the whole table help define each house, with the help of some Fudge dice! But this takes us right up to my first issue: what are the 'stats' we'd be rolling up for each house?

Here's the only one I've gotten so far: the starting state of Loyalty. This is the key, because rather than having to sit and decide who takes which side, etc, we'll roll for it. +4 is absolute fanatical servile devotion to the Terran Throne; -4 is going to be open and total rebellion, taken to war-crime-y lengths like systematic atrocities visited on Terran civilians and/or Terry sympathizers. Zero will be 'neutral.' We'll put a 'slipstream guarantee in at this point as well: if there's not at least one House at +2 or higher and one House at -2 or less, we'll use [some algorithm that we'll determine when we figure out what the other stats are] and place a House at any needed value of +2 and -2.

Now we've pointed out my problem - I'd like to figure out what other stats need to be determined. I don't think tech is a good choice, as the original game presents each of the houses having equivalent values for their forces (in other words, everyone's laser tank battalions are as good as everyone elses), with the Terran forces being slightly better than their House counterparts. So I think tech gets a pass here. Which house gets which power is set by the original game as well, and rolling to determine which Artifact they get isn't interesting enough from a narrative point of view to bother with (if we even stick with this idea, it'll just be a flat die roll, or picking the actual chits from the original game out of a bag).

The original game does give each House a slightly different mix of forces, and the ones who have arguably 'worse' forces get more reinforcements - this dichotomy might lend itself to a 'guns or butter' stat, where +4 is an overbuilt military force that's already stretched the limits of a House economy to the point that it's unsustainable, while -4 is a House with virtually no military at all, but with tons of economic and industrial potential to be converted to a war footing in the future. The problem is that this feels a bit reductionist and silly, and I'm not sure it really passes the laugh test. I could split this into two seperate stats - 'Mercantile' and 'Military.' That would give us the possibility of having some houses be all-around powerhouses, and some getting screwed on both fronts. This doesn't replicate the game, but I want to be inspired by the setting, not shackled to it; and the thoughts of some Houses getting to be like pre-WWI Germany, with a massive military and a bumpin' economy while others get stuck being post-WWI Germany with no military and a boned economy seems like it could make for both good RPing as well as interesting fodder for wargaming scenarios. But splitting them out thusly means we're already at 3 'rolled-up' stats for each house. I'd be willing to go to four stats, but five or more feels like it would be a bit much.

Can anyone suggest any other stats that you, as a player, would be interested in knowing about a faction before you sit down to game with it? I'd thought of some sort of 'democracy' or at least 'decency' stat - while the houses are all run by the noble families, maybe something that moves them along a spectrum from 'legitimately concerned with our subjects and giving them some voice in their governance' to 'throw another serf on the fire, this one's quit screaming?' Maybe a stat for how stable each House is? While the backstory suggests that they're some sort of long-standing hereditary nobility, an unstable house might have lots of cadet branches of the main family arguing that they're the real heir?

Any suggestions will be greatly appreciated. Later on this week I'll post something about character creation in this setting, and fish for ideas on how to handle the 'immovable objects' of the setting (the Imperial Terran Consulate, the natives, the invaders, and the mercs).