So astute readers might recall a nearly three-and-a-half month lack of batreps between the Battletech game of October 14, 2011, and last week's Heavy Gear game (January 27, 2012). Sorry! Here's a quick recap of stuff I played during that hiatus; I suggest you cue up "Eye of the Tiger" by Survivor while reading this post for the full montage effect.


A game of full-rules Classic Battletech, run by Brandon, where Tyler and I fought it out. Vague memories include one of my mechs getting headshot and one of Tyler's falling down and me swarming it with Protomechs. 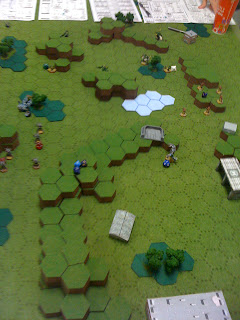 Another Heavy Gear matchup between my SRA 35th Combined Arms Regiment ("Les Somnambules") and Britt's WFPA (or Northern Guard?) force. One of my bazooka-toting Jägers has had a bad afternoon. His surviving comrade is holding up a big knife to warn people to leave him alone. 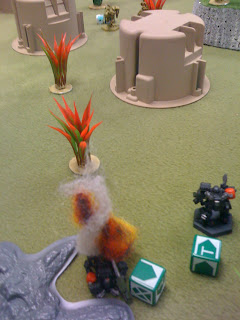 The four player Battletech Quick-Strike game I ran at MACE last year. My first real con, and the first time I tried to host a wargame 'in the wild.' All four players seemed to enjoy themselves, and I'm planning to do it again soon. The scenario was a battle from the Ronin War. 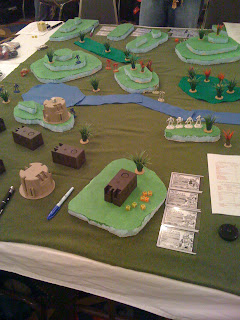 A similar but much smaller setup of roughly the same scenario at our FLGS, Hypermind. New member Rory, from Mebane, North Carolina (by way of South Africa) uses the trusty Mark One Eyeball to check line of sight. 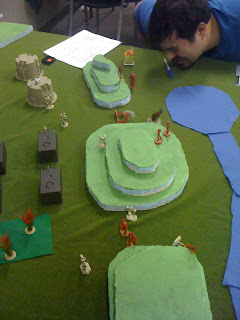 A somewhat ill-fated attempt to play 2v2 Heavy Gear - Britt (WFPA) and Tyler (Black Talons) versus Brandon (CEF) and me (SRA). Britt and I basically air-slapped at each other ineffectually while Brandon and Tyler rained hell on each other. 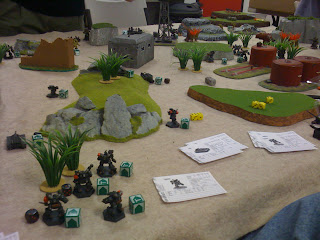 Another HG matchup between Britt and me, in his gaming room. By now the astute viewer will note that the metabanana plant is endemic to every setting where I push lead around. My apologies. I will endeavor to make sure they aren't at Borodino with Napoleon this fall. 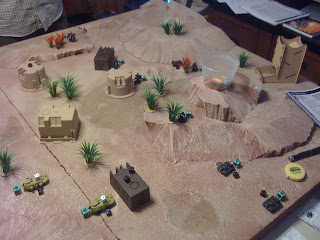 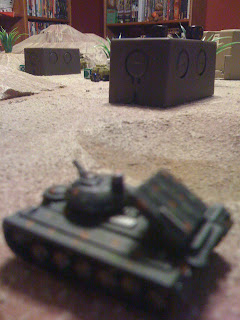 Keith and I have been playing lots of Space Hulk this winter. Here we see a before and after shot, showing what one motivated Space Marine and his assault cannon can do. 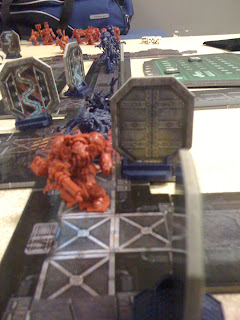 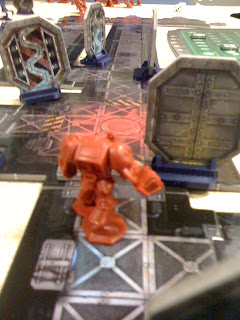 Britt and I playing Heavy Gear again; here we rolled up an encirclement-type scenario, which I failed miserably at. 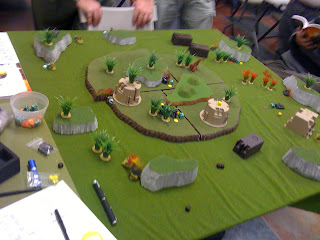 Mutiny! My dark, DARK grey SRA unit, the 'Sleepwalkers,' is fighting Dale's (our Friendly Neighborhood Pod Squad Rep) green SRA unit. Someone probably got caught misappropriating equipment, or was found to be ideologically unsound, or they stole the last toaster strudel in the mess tent. Out of sight in the woods at the top left is Dale's Naga, making life miserable for me (the small brown disk visible on the edge of the woods is its recon drone). Out of sight behind the camera is me making quite rude gestures towards the Naga. 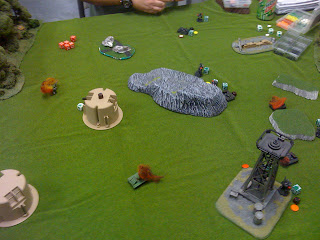 Back at Britt's, facing off against his new Aller tank with the very scary railgun. The wisp of greasy smoke in the foreground used to be one of my Hun light tanks. 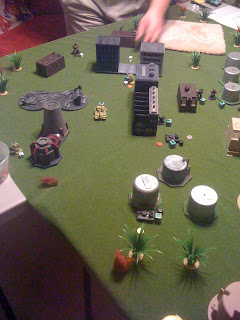 And that pretty much catches us up. Hopefully another of these penance/make-up work posts will not be necessary in the new year. Sleepwalker Actual, out. 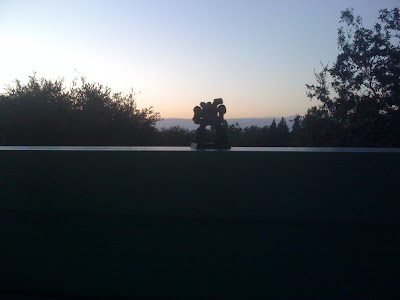