Got in a game of Flames of War this past Wednesday, and semi-demoed a game of Heavy Gear on Thursday for Rory, with the cooperation of Justin, who's already started playing. 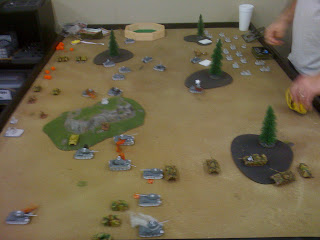 FoW: long story short, got my CiC killed and pushed below the company morale threshold before turn 7, which was how long I needed to hold my two objectives. I had fun, and my opponent, Mike, was very patient and helpful with me since I hadn't played FoW in about 8 months or something now and had half-forgotten a lot of stuff. Unfortunately this first game in the local Firestorm: Bagration campaign might be my last, as due to space issues all future games will be on Thursday, which already belongs to my current fave minis game...

HG: Rory was willing to give it a try, although he'd said earlier while watching the end of Brandon and my last game that he wasn't sure it would be his cup of tea (SPOILER ALERT: by the end of the night he was figuring out which faction he wanted to buy). Our local Pod Squad rep, Dale, had mentioned the possibility of me joining the Pod Squad as well, since I live an hour west of him and can conceivably cover demos in places like Greensboro, Southern Pines, etc. In that spirit, and with the arrival of another newer (although not newbie) player Justin, Dale suggested I run the demo as a trial by fire. 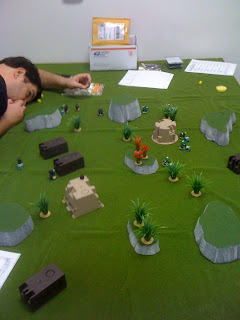 Here, Rory is not sleeping, as the casual observer might think - he is checking line of sight for an attack!  Presumably one of those damnable metabananas is in the way AGAIN.  (nb: work on house rules for using 'Junglemower' VHACs to clear sight lines) 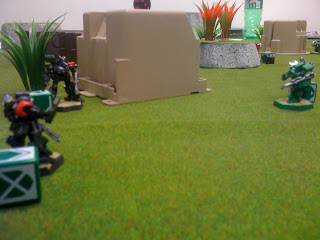 Here, a MILICIA Sidewinder and 'Knifey McGee,' the Jäger whose off-hand I glued a Vibroblade to before realizing he was already carrying a sheathed one, menace a freshly-painted MAC-armed Norlight Hunter. 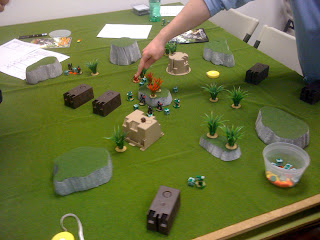 Near the end of their second demo game, Justin is pointing at one of his Hunters, presumably because it's about to do something.  At the top left of the field you can see two MILICIA gears that were recently killed by the combination of a phenomenally well-thrown hand grenade and (if memory serves) judiciously sprayed LRP fire.  Everyone is clustered around the central mesa (the one with the ripe, red metabanana plants, naturally) as for this second game we instituted a simple goal of 'most gears at light or better within 4" of the hill.'  Unfortunately for Justin, his Hunter near the bottom edge of the board will wind up being about an inch short of contesting the hill after its move, and the game will be a bloody draw.

All in all, I think my first attempt to demo the game went fairly well.  There were a few things I still need to drum into my head (like how shifting speed bands and movement modes has a few limits more complex than 'one step either direction'), but mostly this simplified version went off OK.  This coming Thursday Rory wants to play a full game, so I'm coming up with two 500TV lists, to introduce stuff like Command Points, multi-action models, reaction fire - all the stuff that really makes HG shine.  Meanwhile Rory is already thinking up paint schemes for what seems like it might be an Eastern Suns Emirate Guard army....