Which is a totally unfair title, as our new player Zach (pictured below, Doing Stuff) took to the rules like a duck to water. I did what I could to help demo the game, but our eager player base (several of who know the rules a bit better than I do) made my job a bit redundant. Still, I think it was going well - unfortunately I had to leave before he and Justin finished their game (and I had to leave the WFPA "Skyfallers" I'd lent Zach; thankfully Justin has promised them good temporary quarters in his bag). 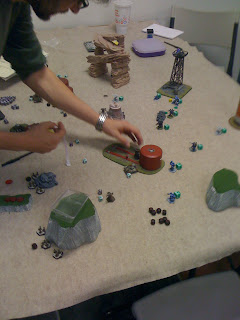 As mentioned, Zach took my WFPA list and faced off against Justin's NAF Blue Meanies. 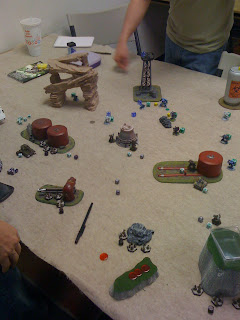 While there were criticisms leveled against my list (grr, Tyler) I was pleased to see that Zach used its minimal ECM capabilities much better than I tend to. He used the two Strike Cheetahs to disrupt several (but not all) of Justin's attempts to forward observe for his Grizzlies. 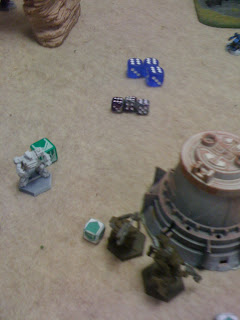 When Justin rolled these triple sixes for his Hunter (the white gear) to grenade Zach's Strike Cheetah and Jaguar, the consensus was that Zach was screwed. That was before Zach rolled trip sixes of his own....

As I said, we kind of threw Zach into the deep end for his 'learner' game, but he picked it up very quickly and was doing well when I left.  Hopefully he, Justin, or one of our other regulars can post the outcome here?  Meanwhile, Zach is wanting to get Heavy Gear on the table at Sci-Fi Genre in Durham; hopefully sometime in the near future we'll work out a day for some (less ambitious) demo games there!
Posted by Ken Coble at 1:17 AM