So here's another lightning recap of all the minis gaming I've done since my last post: 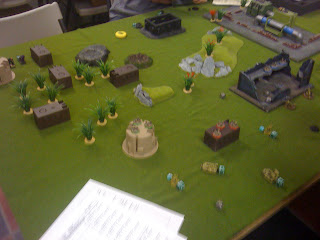 I literally have no memory of this game, but I see my SRA 35th Combined Arms Regiment, "Les Somnambules" (The Sleepwalkers) on the top side of the table, squaring off against Britt's protean Northern list.  There's a decent chance Rory borrowed the Sleepwalkers for this game; gents, do you remember if this is the case? Any reminiscences of this matchup?


This was a match between me, running my WFPA 44th CAR ("The Skyfallers") against Justin's Northern Lights Confederation army (at least I think it was - I seem to remember some Chaplain re-rolls, which indicate a Norlight list).  We rolled up a 'Surrounded' mission, and I took the center.  One of my objectives was to get my Aller tank safely off the board, which I did - although I might have done so too early, as its firepower would have been helpful in the last round. 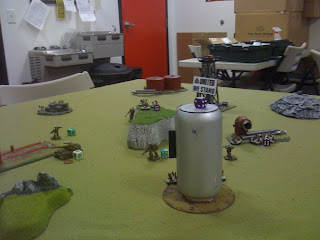 Just off-screen to the left and right are Justin's intermixed Recon and Fire Support squads.  My Dragoon gears are scattering to try and grab some kills, and my infantry are basically screwed due to the lack of buildings or good cover.  Notice my Aller tank casually getting the hell out of Dodge at center left. 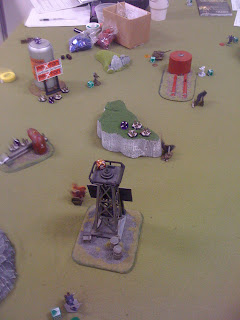 The three smoking wrecks you see here are 60% of my Dragoon squad.  To the upper right you can see my Aller engaging some of Justin's Gears, having knocked one down to its last armor box.  If memory serves I may have actually even killed it, although it didn't make a difference in the long run. 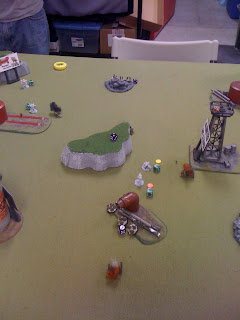 Again, if I remember correctly, my infantry did some damage to Justin's Gears as they closed in, but it was too little, too late... 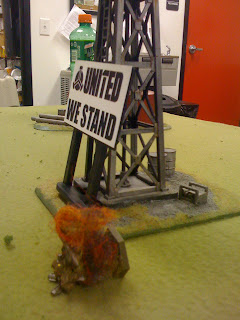 ...as this picture neatly illustrates (cool billboard signage courtesy of my friend Keith, who I will convince to play a game of Heavy Gear someday). 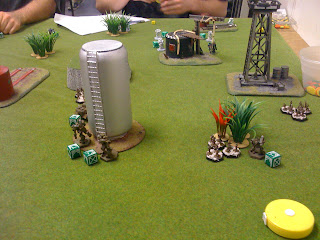 Another matchup between the Skyfallers and Justin's Norlights.  Playing beside us on the same table are Brandon's CEF and Tyler's something-or-other - his new MILICIA list, I think? 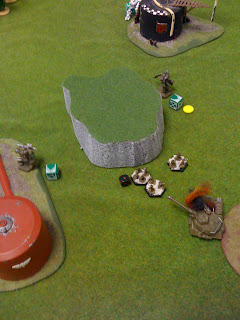 Here's what happens when an Aller stops a couple of Anti-Tank Missiles the hard way. 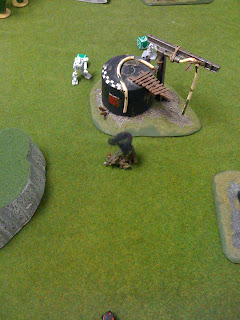 
At this point Britt and I started what was supposed to be an epic Flames of War campaign, using their older 'Axis of Attack' ruleset and (loosely) re-creating part of the Axis thrust in the Ukraine in 1943.  Unfortunately it turned into a three-up, three-down rout for my Hungarians, no doubt due to their lack of paint and not due to my inept generalship or REALLY inept Battlefront Hungarian dice (which are legitimately evil, I think). 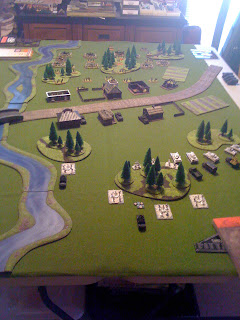 Mission One: Looks promising, doesn't it?  It all goes downhill from here, though. 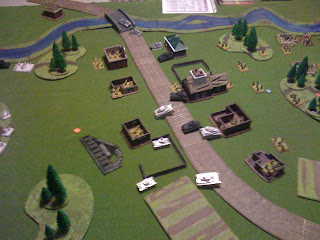 Actually at this point it's still going sort of ok. My Pioneer infantry have jumped into the buildings on their side of the street, preparing to attack the Soviet hordes on the other side.  Similarly my tanks have moved up with no losses from Britt's guns thus far. 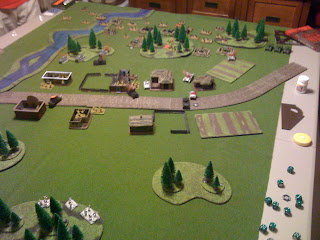 Haha, ok, never mind. Things are already terrible and his reserves have just flooded the backfield. The bottle of generic Aleve by the roadbed is for my leg, not for the giant pain in the ass that is Soviet artillery.  Dumb ol' Red God of War.

Mission Two: since Britt's Soviets won, instead of the Axis pushing forward deeper into Mother Russia, we fought in the same village again.  This one we fought at Ron's store (The Game Connection), with Josh and Rory along to watch us play and pick up the rules; later that night they'd fight it out with different forces in the same town. 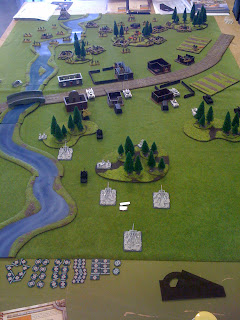 Here we go again.  I deploy a bit more aggressively; however I've also not put my objective anywhere near close enough to the front because I still don't remember that they're not actually scenery and can in fact go in the damn river. Basically the same thing happens as did in our first game, which is fortunate since I don't have any other pictures from this match.


I do have some from Rory and Josh's matchup, however.  In the interest of something approximating impartiality, I made up Josh's Soviet list and am offering him some advice, while Britt is advising Rory's Germans.  I think this was a good idea on Britt's part, as it made us a bit detached since we were advising our enemy; this helps cut down on the 'backseat driver' factor. 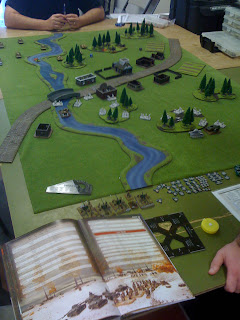 Rory, seated at the top edge, has something like six tanks in his list. Josh is starting out with only brave Soviet infantry and a single T-34 tank as his army HQ.  However, in reserve he has a heavy mortar company, some anti-tank guns, and ten more T-34s. He just needs to hold on long enough to get them on the table. 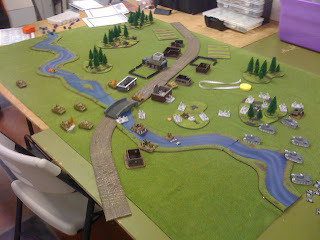 Which he does. Josh winds up holding the objectives for the win.

In the middle of the FoW campaign I got in another Heavy Gear game with Rory - he borrowed the Sleepwalkers, I ran the Skyfallers (I really need to get a new army or three painted up; I have four and a half HG armies primered and ready to go, I'm just a terrible procrastinator which certainly has nothing to do with the just-short-of-two-month hiatus this blog just suffered). 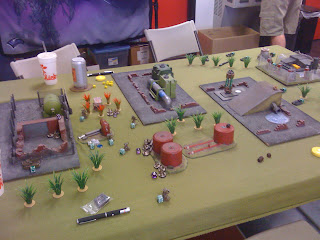 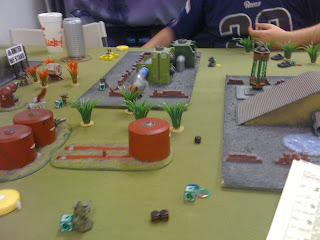 That silver thing that's on fire at middle left only looks like an unpainted German Panzer 38(t), it's actually a Northern Jaxon missile tank.  Or it was until Rory's Huns smoked it, anyway. 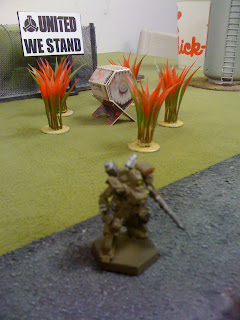 My army commander, being a simple farmboy from the great prairies of the WFP, isn't sure he's buying all this United Mercantile Federation propaganda; he's never even seen the UMFA in the field! 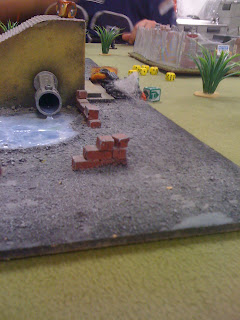 Here's what one motivated Jaguar toting a Snub Cannon (with the Block 40 upgrades of the Dedicated Tankhunter Initiative) can do to two Southern Huns.  A better combat photographer would have actually gotten a picture of said Jaguar, but you take what you can get.  Despite all this carnage, Rory still won, as I brilliantly forgot to give myself enough time to complete my Scout mission (who knew it took two turns to do that?)

And then Britt and I played our final game of the FoW campaign.  Great ruined city terrain courtesy of Britt; great paintjob on most of my armor by Rory.  Hamfisted strategy was mine and mine alone, however. 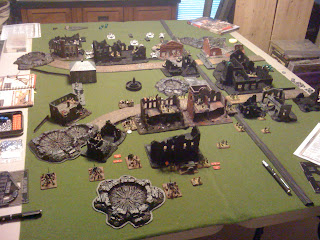 This is what it looked like from Britt's side of the table.  This actually wound up being a fairly good game until a turn of bad results (and the cumulative effects of about a million failed "Bog" checks due to an early thaw) broke the back of my final offensive. 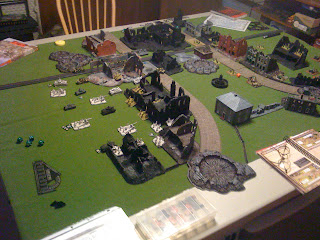 The little green triangles you see next to four of my tanks are "Bog" markers, indicating that my tanks have gotten stuck in the horrible Ukrainian mud and are going to be useless for the current round.  I had thirteen armor units in my list, and four of them bogged down was probably the average result each turn.  You do the math. 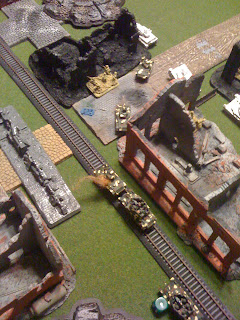 One of my Toldi I recon tanks has brewed up, blocking the relatively good terrain of the railroad for my Nimrod AA tanks (which are being pressed into service as infantry hunters, since the weather has canceled air support for both sides). 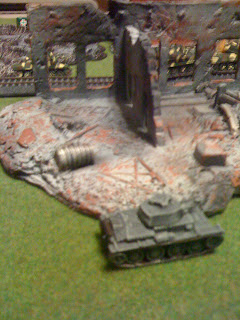 My company 2iC, riding in a Panzer 38(t) looks through the walls of a ruined Soviet tractor factory as his tankers come under fire from Soviet 45mm AT guns. 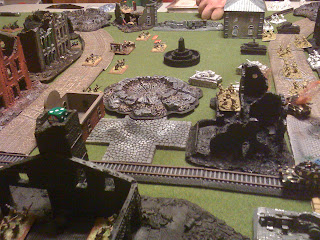 "The clock on the wall says three o'clock.
Last call."
I throw my Pioneers and all my tanks forward in a desperate push.  My artillery has been only partially effective all game, and things are getting bad.  As this is turn 3 Britt will start rolling for his reserves, which means they will only get worse. 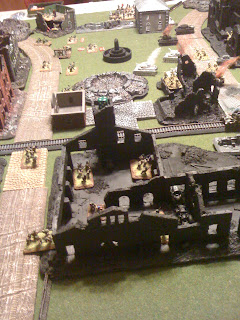 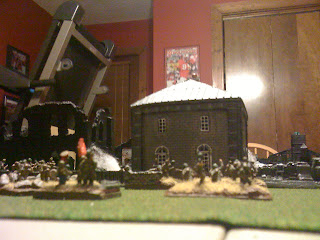 Britt's batallion commander looks on as his brave frontoviks rush forward, victorious.  I don't think the commissars even had to shoot anyone.  That's a good day in Uncle Joe's army!


Whew! All caught up. Let's not let that happen again.
Posted by Ken Coble at 9:51 PM