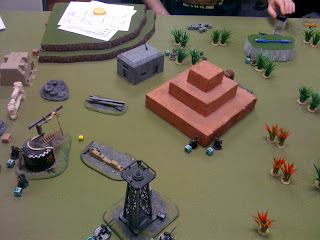 The early hours of the second CEF invasion of Terra Nova saw a hundred tiny unnamed battles, as forward elements of the invasion forces encountered the scattered defenders, frantically converging towards the CEF drop sites. One such encounter took place as CEF Korps V and VI pushed from their initial drop zones towards Port Oasis, capital of the Southern Republic. The SRA deployed all available forces to meet this thrust while awaiting landfleet reinforcements. 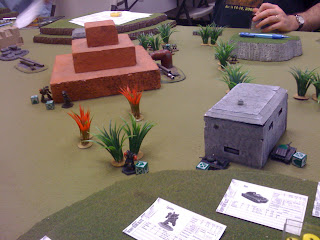 Typical of the units thrown at this threat was the 35th SRA Combined Arms Regiment, "Les Somnambules" (The Sleepwalkers), a mixed unit of infantry, light gears and tanks. The first CEF forces the Sleepwalkers faced were a scouting element, composed of fast HC-3 hover cars and the mysterious new FLAIL infantry units. SRA command wanted intel on these units, and getting that info back to Port Oasis was a priority - Recon (FLAILs) and Survive (GP Cadre) objectives for me. The CEF, on the other hand, primarily wanted to smash the faster elements of their opponent's force and push forward with their hover vehicles to blaze the trail to Port Oasis - Survive (HC-3s) and Wipe them out (GP Cadre) objectives for Brandon. 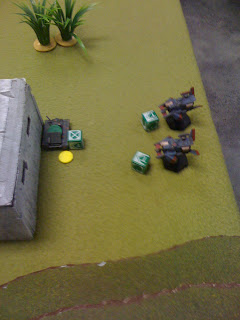 Despite early reports of the speed of the new CEF hover vehicles, the command tank of the Sleepwalkers was, appropriately enough, caught napping. Concentrating their laser cannon on the tank, the Earthers made short work of the Hun, leaving the SRA without a leader until the Sous-sergent of the GP Cadre stepped into the breach. 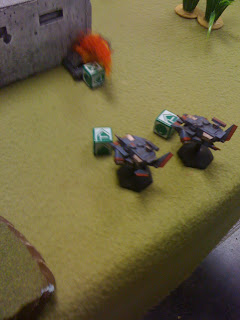 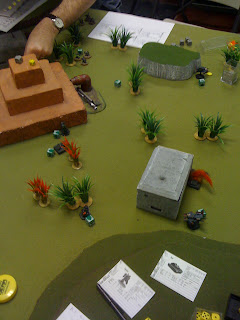 Meanwhile, as one of the hovercars fell back towards the southern end of the valley (taking a few parting shots from the laser cannon of the surviving Hun), the Sleepwalker gear cadre was tentatively coming to grips with the strange new infantry units. Field gun fire called in by the Iguana gear seconded to the tank cadre was effective against them, fairly quickly wiping out two of the four squads in the field. Unfortunately, this only marked the field gun battery as a priority target for the remaining hovercar... 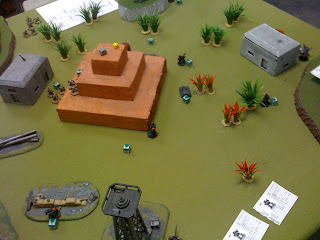 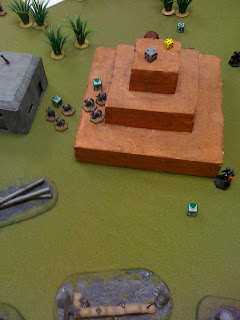 The two FLAIL squads that were still active moved forward to the large ziggurat in the center of the valley, exchanging fire with the GP cadre. While the SRA's gear pilots were phenomemally lucky in avoiding their fire (NB: there was a period here where I was only rolling sixes on the few occasions where I didn't roll boxcars, which count as a seven in HG), unfortunately it was virtually impossible for the generalist gears to damage the FLAILs. All the Sleepwalkers could do was to continue getting as much sensor data on these strange new infantry units as possible, scanning each squad at least once. 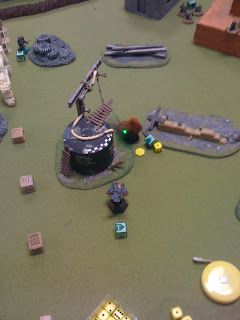 By this time, the hovercar that had just silenced the Field Gun Battery (NB: which like an idiot I forgot to get pics of) had used its ELINT suite to determine which Gear was now acting leader, and proceeded to light it up with laser fire. Having done this, it traded shots with another Jager gear, damaging it heavily, before speeding out of harm's way.

Leaderless, the SRA began to flounder, and the 'Sidewinder' heavy trooper gear of the cadre unwisely attempted to engage the FLAILs rather than retreating to buy time. The outcome was inevitable: 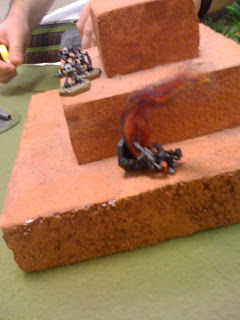 At the end of the engagment, both sides had accomplished part of what they had set out to do - the CEF's hover scouts continued in their push for Port Oasis (Survive, 2VPs for Brandon) but failed to eliminate their chosen targets (Wipe Them Out, 0VPs). Meanwhile, the 35th had secured some of the first useable data on the new FLAIL walkers (Recon, 2VPs for me) but had sustained unsupportable casualties in doing so (Survive, 0VPs for me). As we were both PL3, this meant a true tie, although I think the clear moral victory has to go to Brandon, for killing my Army Commander on turn 2 as well as hammering half my GP Cadre into slag, only for the cost of a few brain-in-a-jar FLAILs.

EDIT: today Brandon actually reminded me that it was a 3-3 tie, as he got one point for killing/critically damaging half or more of my GP cadre, and that I got one point for keeping at least one of them alive! A strange quirk that arises when you and your opponent's randomly determined squads for counterpoint goals like Survive and Wipe Them Out align like that!


I'm continuing to love Heavy Gear. The mission selection matrix is very simple (although we did discuss how nice a pre-game setup worksheet would be, mostly to cut down on page-flipping) and yet gives you some very interesting goals to accomplish, which can interact with the goals of the opponent in neat ways that make for, in my opinion, much more compelling gaming than simply smashing your toy soldiers into your buddy's toy soldiers making 'pew pew' noises. It was a lot of fun getting to see Brandon's list in action, which taught me a new respect both for the tough FLAILs as well as for my own Field Guns!
Posted by Ken Coble at 3:36 AM