27 Spring 1943
The marauding Rovers in the Eastern Desert begin to
move North, into the WFP. Still rattled from severe
losses during the war, the WFPA has difficulty protecting
the League’s far-flung rural homesteads, and many are
sacked or forced to fend for themselves.
-timeline entry from Return to Cat's Eye

In response to these encroachments, WFPA command initiated a series of training exercises, set to rotate through several areas thought to be especially prone to future raids. The hope was that these maneuvers would fulfill multiple goals simultaneously - reassuring nervous homesteaders, sabre-rattling to cow the Rovers, and familiarizing WFPA units with terrain they might be fighting over before too long.

One such exercise is presented here. Designated OPERATION: BARLEYCORN, near dusk on 14 Summer 1943 an aggressor unit from [REDACTED] simulated a raid on a small irrigation/hydroelectricity center west of Fort James. A mixed Gear/infantry detachment of the 44th Western Combined Arms Regiment ("Skyfallers") (me) was assigned to represent the kind of rapid-reaction force that might be deployed in response to such a raid. While the Skyfallers approached from the east, simulating deployment from the Gamma maglev line, [REDACTED] (Britt) units were tasked with maneuvering past them back into the open, as WFPA General Staff thought this would be the typical post-raid posture for a Rover band ('Escape' objective for Britt). 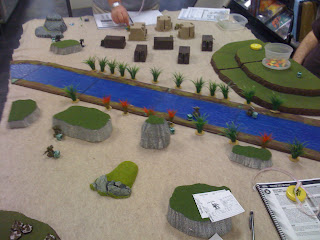 Here we see the 'Jump' Dragoon element of the Skyfallers, who deployed on the ground instead of airdropping, in order to secure the southernmost mesa ('Hold' objective for me). Black and Yellow teams of [REDACTED] are moving forward to scout the second mesa, believing the rapid reaction forces are organizing their assault from this area ('Scout' objective for Britt). Already, members of the Dragoon squad are moving forward, trying to get solid ELINT on the black unit, a task meant to simulate the need to positively identify Rover band affiliation for accurate future reprisals ('Recon' objective for me). 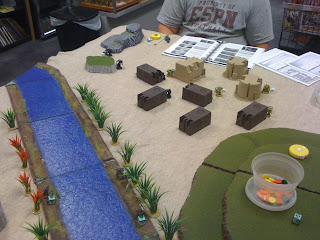 Next we can see [REDACTED] taking a defensive posture behind several of the pump houses and generator buildings in the hydroelectric plant, while two Skyfaller Strike Cheetahs move up along the canal to begin their ELINT collection, covered by a Jaguar gear carrying a Snub Cannon with the Block 40 upgrades of the Dedicated Tankhunter Initiative. Unbeknownst to the Skyfallers, the Hunters of [REDACTED] Yellow approaching them are also carrying Snub Cannons, although theirs are the older, unaccurized models expected to be seen in a lower-tech force like Badlands Rovers (they are also heavily field armored, another feature of some Rover bands). 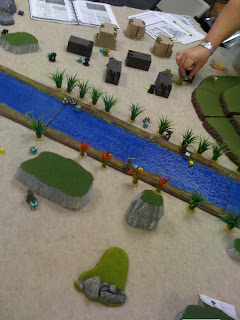 At this point, the Skyfallers infantry platoon parachuted onto the battlefield. Unfortunately, erratic evasive maneuvers programmed for their VTOL to represent dodging AA fire (I rolled THREE SETS OF SNAKE-EYES in four scatter rolls for their deployment) led to a very bad drop pattern for the infantry, exposing them to withering simulated rocket fire in the next several minutes. Squads One and Two were ruled utterly dead after the initial exchange, and Three and Four also suffered heavy casualties (losing one and two fireteams each), mitigated only by the sparse cover of the canalside metabanana groves. One Gear from Aggressor Black has been hit by the Skyfaller Jaguar's Snub Cannon, but the legendary resilience of the Hunter gave a simulated result of only light damage (note the yellow chip near the black gear). 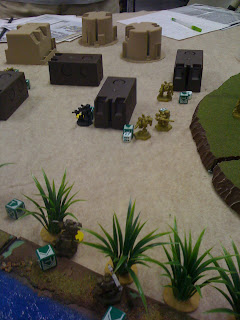 Meanwhile, Aggressor Yellow began rolling forward, preparing to slip around the northern ridgeline while punishing the exposed members of the Skyfaller force; as seen here, despite their older model Snub Cannons, the forward element of Aggressor Yellow has managed to hit the Skyfaller Jaguar, and it takes light damage itself (again, the yellow chip, this time on the brown gear). Also, as the engagement has continued, several members of Aggressor Black have been electronically interrogated; the other two Skyfaller Jaguars have used this info to indirectly fire their rockets at the ID'd Gears, but with little to no results. 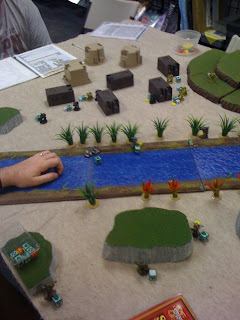 Further exchanges of fire between the dueling snub cannons do slight damage to an up-armored Aggressor Yellow Hunter, but soon thereafter its return fire is ruled to have totally destroyed the Skyfaller Jag. Also, a simulated artillery strike has damaged one of the Strike Cheetahs, which tries to retreat behind the line of mesas. Infantry Squad Four has finally been ruled dead as well, having accomplished nothing with a few desultory anti-gear rifle shots. Squad Three has been similarly toothless, landing a few hits with their simunitions, but nothing the umpires ruled effective. 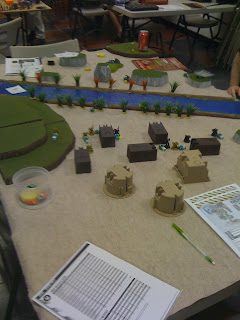 The umpire staff called a halt to the exercise at this point; while the [REDACTED] Aggressor units did much more damage - neutralizing a platoon of paratroop infantry as well as getting a simulated kill on an elite Jaguar gear, they were unable to maneuver past the Skyfallers or successfully scout their assigned point. Meanwhile, the Dragoons held their assigned point and managed to gather ELINT on all members of Aggressor Black. Staff ruled the rapid-reaction force concept provisionally successful, although there have been serious discussions at the regimental level about the efficacy of airdropped infantry when armed as lightly as the Skyfaller elements were in this exercise. [REDACTED]'s commander has been invited to comment on their participation in this exercise as well.This was my second game against Britt with Heavy Gear's new 'Field Manual' rules updates, and while I got the win I feel like I kind of snaked him on my choices of objectives. We also played on a longer table than recommended, and I'm still not sure we're using enough terrain. Still, both of us had a blast, and I feel a lot more comfortable with the rules themselves. Britt and I also got a real feeling for how much the objective system changes the nature of the game; in particular, Britt said he has a totally different concept about how his planned army will actually work on the table now.

Meanwhile, although I started as a Southern player, I gotta admit I really like the Northern gears more and more every time I get them on the table, and I've developed a real soft spot in my heart for my little WFPA dudes. Now to finish up the other 500TV of the planned list, a Northern analog of the Southern MP cadres, my Fort Somewhere-or-other Piper Polizei.
Posted by Ken Coble at 1:12 AM