The return of Heavy Gear and the departure of Whooping Cough

Yes, I think I had whooping cough, since I was around my cousin's kids and their school had a recent outbreak and I certainly felt miserable enough (complete with paroxysmal cough) to think maybe I got it? In any event, finally feeling good enough to make the trip to Knightdale and play some Heavy Gear again! I was getting a bit tired of my omnipresent SRA 'Les Somnambules' (35th SRA Combined Arms Regiment) so I broke out the good ol' WFPA 44th CAR, 'the Skyfallers' and faced off against Brandon's PAK list.

As always, it's been exactly long enough for me to get sort of rusty on the rules, and based on it being WFPA versus the PAK I haven't figured out exactly where our fight would fit in the fictional future history of Terra Nova, so no cutesy AAR this time, just a few pics: 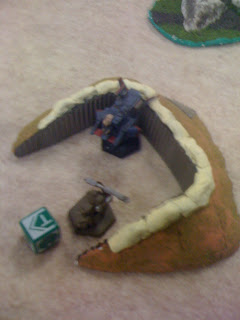 I figured this Strike Cheetah was dead, but the PAK HC-3 Recon Hovercar dashed past him to spot my infantry in the backfield! 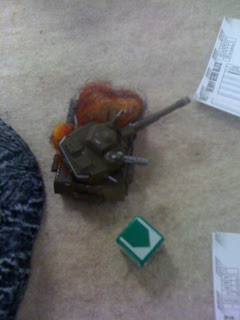 This is what two Anti-Tank Missiles can do to a totally unscathed Hardy Aller (meanwhile, the Aller's low-tech unguided VHFG round utterly missed its target the turn before - 280 TV well spent!) 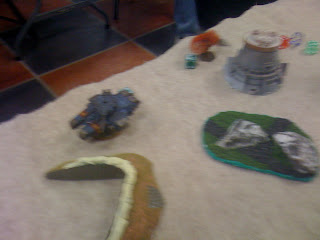 This terrible blurry shot shows that Strike Cheetah from before, finally out of luck. Of course by now he'd recce'd both PAK hovertanks, so he died a hero of the WFPA! 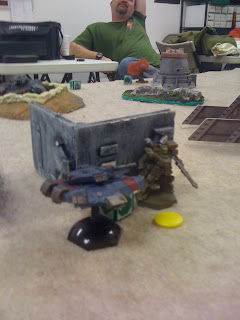 This was near the end of the game, and one of the GRELs (a sort of vat-grown hypnotrained combat bioroid - think Roy Batty, but purple) in Brandon's light hovertanks failed their instability roll, and was compelled to show off by moving at utter top speed for the turn. Brandon tried to make the best of it by ramming one of my few surviving gears (the Army Commander shown here) but the dice came through for me and he missed me.

The other neat thing I didn't get pics of was my crappy infantry finally whittling down one of his HC-3 hovercars. I frankly felt like I stole the win by running my two last gears up into the face of his two unscathed large hovertanks. If we'd played one more turn they'd have been slag, but by the rules of the 'Seize' objective Brandon was working on, I'd successfully 'contested' control of the tank blind from him, denying him the VPs for that objective and giving me a very 'gamey' one VP win. Still, we both had fun, and playing against his PAK/CEF makes me want to get to work on mine. Love those hover vehicles!