34 Spring 1949
The WFP parliament officially dissolves and is placed under control of the CNCS until the new governmental elections are held. UMF Treasurer Stamens officially welcomes the move to more open elections, citing the move as an inspiration for his own nation. Plans are to have the election and ratification of a new constitution by the Autumn.
- Heavy Gear Blitz! Black Talon: Return to Cat's Eye, p. 96

Against this backdrop of political destabilization, a chance border encounter led to the unfortunate incident later referred to as the Battle of Lookout Hill.  While on a wide patrol during the political crisis shaking the Western Frontier Protectorate, and with contradictory and irregular orders coming down from high command, a unit of the 44th WFPA Combined Arms Regiment ("The Skyfallers") made contact with a detachment of "Les Somnambules," the SRA 35th CAR.  The Skyfallers were already at a fever pitch, as the rumor mill and patchy communications with WFPA command had led them to expect an attack by whatever 'outside saboteurs' were ostensibly responsible for the current governmental crisis.  In a tragic coincidence, the SRA 35th CAR was on a hair trigger as well, in the immediate aftermath of Lord Protector Molay's failed coup in the Southern Republic - which the "Sleepwalkers" were a part of.  Having only been officially reinstated into the SRA after their surrender a few weeks before, the Sleepwalkers were still waiting for the axe of 'unofficial sanction' to fall - turning the simple accident of their encounter with the Skyfallers into a meaningless bloodbath, and a tragedy for the small Badlands settlement of Lookout Hill.

WFPA objectives - identify the outside agitators (Recon, 2OP), hold the comms building until able to report to command (Seize, 2OP)
SRA - cause enough casualties to disrupt pursuit (Wipe them Out - Infantry, 2OP), get the hell out of Dodge (Breakthrough, 2OP)

Unfortunately, I only snapped a handful of pix, and several of them are basically unusable, but here's the bullet-point version.  I lent my SRA army to Rory for his first full game of HG, I ran my WFPA.  My plan was to try and slow/stop his tanks with my Jaguars, while using my Strike Cheetahs for the Recon objective.  All surviving gears were supposed to rush my Seize objective, a bunker nearly in his deployment zone, while bunkering my infantry in available buildings to both try and keep them alive (deny his Wipe them Out) and at least partly contest his move into my deployment zone (deny his Breakthrough).

This did not happen.

To be fair, my Cheetahs did their job, and managed to earn full marks for my Recon objective before finally getting taken down in a storm of coordinated fire from Rory's GP cadre.  But with only one real chance to ding Rory's Hun light tanks (my lone Snub Cannon-armed Jaguar) and one longshot (the Frag Cannon Jag, who totes Heavy Hand Grenades) I'd have been better off dodging them all game rather than trying to engage them. Meanwhile, Rory pushed the Huns forward, using their Iguana escort to spot for his Field Gun battery, and slowly battered my Infantry to death.  By the time I was ready to push past the Huns and disengage from his GP cadre, my Dragoon squad had taken so much fire that they were all but dead already. 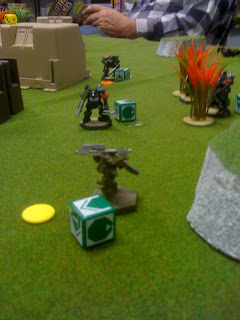 My Strike Cheetahs, sprinting into the heart of Rory's GP Cadre 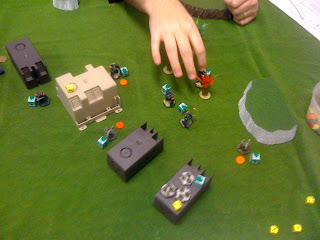 Both Strike Cheetahs are already Heavily damaged, but are getting Recon locks.  The infantry 'inside' the bunker are starting to do noticeable damage to the SRA with their Light Mortar. 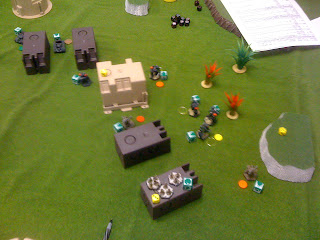 More of the same.  Notice to the left, the Huns and their spotter are moving through the town. 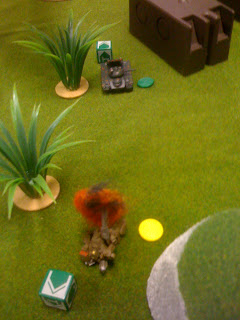 Having silenced the FGC Jaguar, this Hun's turret is already searching for a fresh target 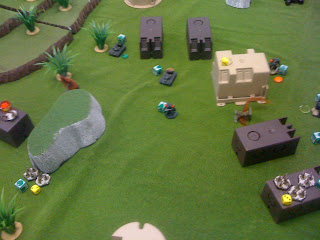 At this point, my only chance is for the two pictured infantry units to weather one more turn of fire... 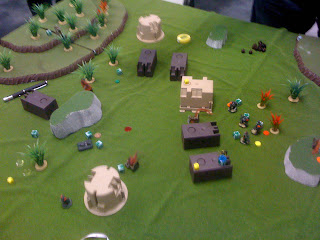 ...which did not happen.

Still, a great game.  I did a ton of damage to Rory's GP cadre but never managed to kill one.  The Huns were basically untouchable all game, and it would probably have been smarter for me to treat them as such.  Interestingly, Rory misunderstood which bunker I was trying to Seize, and the fact that he'd split his Huns around it before pushing them forward was a happy coincidence rather than the intentional blockade I thought it was.  Regardless, the win was Rory's, 4 to 2.  Presumably the Sleepwalkers made it back to SRA territory; Skyfaller casualties were near total, with only the Snubby Jaguar left alive to bear the tale to WFPA command.  If he makes it back to friendly lines, the Skyfaller unit history will record a shameful defeat, and a score to be settled once the Earther invasion is repulsed....
Posted by Ken Coble at 12:20 AM