Game the second: or how I leared to stop worrying and love the assault phase 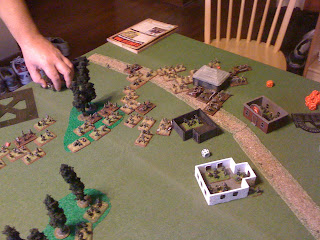 My second game of Flames of War with Britt (and again, with his minis) was much more complex, but still fun. He's wisely been introducing one new game concept per matchup, and our second game introduced infantry. It introduced a lot of infantry, to be perfectly honest: 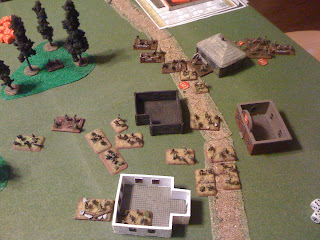 I will try to get Britt to remind me what the exact flavor of badass was for all those Russians I was looking down the barrel of in this picture - was it a Shock Battalion? In any event, there were more than enough of them, and my Germans were spread throughout the little town just enough to ensure that each assault flowed into a new counterassault und so weiter until basically all my foot were dead.

I managed to pull out a win anyway, through a combination of lucky dice rolling and historically questionable usage of StuGs as machine-gun platforms. At the time we weren't quite certain we handled the assault rules correctly, but as far as my follow-up readings go I think we got it pretty much right. I did find it interesting that while shooting in FoW is strict IgoUgo, there are reactive elements in the assault phase that the main game mechanics seem to be lacking. I'm not sure about the design philosophy behind this, unless it's maybe that pure IgoUgo with infantry would marginalize them into unplayability?
Posted by Ken Coble at 6:35 PM