I guess this game marks the beginning of my descent into true old-school grognardism - my first game of Napoleonics. Britt invited me to come watch as he and his friend Ron, who runs The Game Connection in Knightdale, played some 15mm Napoleon's Battles. When I got there, Ron was kind enough to step aside and referee a matchup between Britt and me instead (a lesson I should have learned before the Battle of the Four Corners). Ron had set up two fairly equivalent corps-sized forces before we arrived, using his own very nicely painted minis; I got the French, and Britt got the Austrians. We set up on opposite sides of a small village crossroads, and went to work.

This is another of those reports that I totally should have written earlier, because my memories of what went down are shady at best. For example: 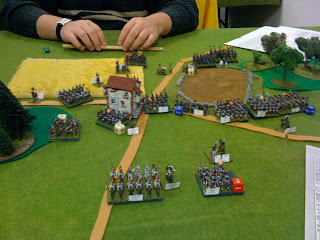 I have no recollection of what happened to this unit that had it suffer two lost bases (and that red 3 means it's one hit away from losing another one); similarly I can't recall what I did to the unit in Britt's backfield. If I'm remembering the marking conventions correctly, both those units routed, but lord only knows why. On the left flank, his Grenzers are causing me a bit of grief, which I'm going to try and remedy with a cavalry charge with that unit of light cav I was holding in the backfield. Meanwhile our two infantry units (I think they were both regular Line troops) are facing off against each other on the outside edge of the house. Both of us have our artillery in our centers, taking potshots at each other, and on the right flank we've both lined up two infantry units and our heavy cav (if memory serves, the blue 'disordered' die on my cavalry is due to having made a fruitless charge against Britt's cavalry and bouncing back). 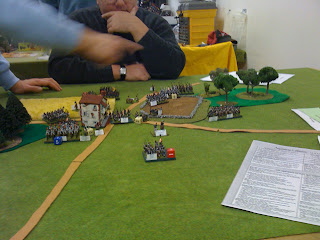 Here's the aftermath of the next turn: my cav charged his Grenzers and scattered them (you can barely see the top of their unit in the wheatfield behind the building). You can't really see past those horses, but Britt and I still have an infantry unit each facing off there on the outer edge of the house/village. I believe our cannons traded shots in the center; Britt put some casualties on me, but one of my two charging infantry units scattered one of his batteries. And on the right, I launched an infantry charge (mentioned above, I believe) across that turnip field and I'm apparently holding my cavalry back for some reason that I can't recall. This is where the subtitle of this entry comes from: I can roll a lot better on 10-sided dice than Britt can, apparently. His Insurrection troops did a lot better than they should have based on statlines, becoming the underdog heroes of the game, but they eventually took enough casualties to rout. 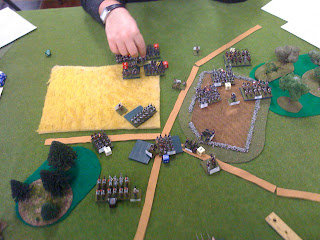 At this point, I've managed to win my infantry duel on the outer edge of the building, causing a third rout, and something or other has happened to cause a fourth rout that I simply cannot remember. I'm thinking it was Britt's cavalry who'd snuck up around my left flank (long way around that forest) and struck my cavalry and came off the worst in the matchup, but I won't swear to it. There are other neat things I remember, but I can't place them into the position they occurred in the game (like successfully getting one of my infantry units to form an emergency square and bouncing one of Britt's cav charges, or having my own heavy horse charge off the back edge of the table chasing down something). But despite my slightly fuzzy memories, I do recall having a total blast - enough fun that I picked up my own copy of the Nappy's Battles rules that night! But I also remember that I basically won due to having a series of really great rolls, as opposed to Britt who had a series of really awful rolls. Still, Napoleon himself (apocryphally) said to Ney, "Go back and find me a lucky general." That game, I was the lucky general.