It's been over a month since this game, so this will be a sketchy-as-heck recap. Britt and I fielded opposing GP squads at something like 220TV; my filthy MILICIA proles versus his UMF wageslaves. Britt set up in and around some stoneheads in the steep terrain; my MILICIAmen came zooming in down a longer, gentler slope. Somewhere I should have a scrap of paper that told what our objectives were, but I picked 'Recon' for one of mine, and we settled on the biggest stonehead as the target of that objective. 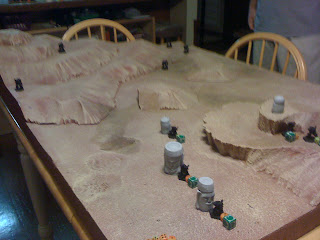 These are my fragmentary memories and impressions of what went down:

-the shooting felt very very inconclusive until we were practically on top of each other. It made me consider using the 'More Carnage' options in future games, until Britt pointed out the next day that I'd managed to totally miss the modifiers for being in open terrain, which would have made lots more of our shots hit.

-being in motion beats the hell out of being stationary; those defense mods at stationary are horrible, and only Britt's good use of the stoneheads as solid cover made his shoot-n-scoot tactics overcome those horrible mods 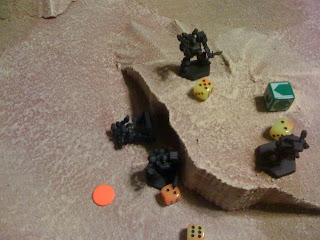 -Indirect Fire still doesn't make a lot of sense to me; I think we finally figured it out correctly, when Britt rolled a gear-scaled grenade over a small rise and killed my combat group leader (thereby fulfilling his Assassinate! objective)

-I need to do some 'housekeeping' stuff before our next game; namely, I need to finish making my homemade movement markers, and I should probably print out extra copies of the combat summary/quickref rules (frankly I should do this for every single game I plan to play)

-we need more terrain for these games, as cover and concealment are big parts of the ruleset

Eventually, we finished up, with a marginal win for me due to getting the VPs for my Recon objective. It was a good game, but still obviously a learning game, marred by me having to delve into the rulebook for everything more complex than a simple direct fire roll (and even then I had to look stuff up just to be safe). I like the HG rules; there's a pleasant level of complexity to them that makes even a little 5 gear vs 5 gear rumble like this one fun. There's cool stuff we totally neglected to do, like using our CGLs to set up crossfires; conversely, there's stuff that I still think is a bit clunky in the rulebook, indirect fire and some of the sensor/lock-on stuff being the chief culprits in my opinion.
Posted by Ken Coble at 4:21 PM