Intro (as painless as possible)

These 'opening salvo' kinds of things are always the shakiest, due to the hassles of figuring out both the content and the medium. So in the interest of clarity, this is going to be a blog about my miniatures gaming stuff. I've been interested in it for quite a while, and have accumulated tons of models without ever getting much further than a handful of painted squads with virtually no table-time. But starting this fall, I decided to finally get serious about this as a hobby, and so far I have had a great deal of fun. So in order to make this stuff a little simpler to talk about with people I know as well as other people in the hobby, I'm putting this blog together. As I begin, I'll be working from memory on my first handful of games this fall.

My friend Britt got me to finally actually play a game of Flames of War earlier in the fall (utilizing his minis, of course; we'll be a bit further along before we get to pictures of minis I own, and even then they're going to be primed at most for a long time), which I will rather arbitrarily be defining as the starting point for this blog's purposes. It was a straight-up armor vs armor matchup, with my Germans coming off much the worse for wear: 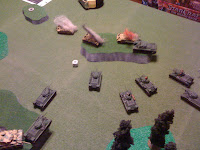 That's a lot of burning German armor. Still, I had a good time; it was a simple introduction to the ruleset, and while I know FoW's "I go/You go" set up is a sticking point for a lot of people, it seems like (based on this game and the two followups we've played thus far) a simple, straightforward ruleset, and possibly one of the best ones for me to use as my point of introduction to wargaming. In any event, this opener is out of the way now, which is probably a good thing in and of itself, regardless of quality.

EDIT: it would be both correct and politic to mention that the inspiration for this blog, as well as its name, comes from my friend Chris Norwood's blog GamerChris.com, which is a really good boardgaming blog that you're probably already reading if you're looking at this blog.
Posted by Ken Coble at 6:06 PM