Revolt on Antares #3: Psionics and Status

Bear with me. In the Revolt on Antares mini-game, the heads of each colonist House have powerful psionic abilities, and in my attempt to hack it into a RPG setting I'd like to key in on this, with the notion that the more of the 'royal blood' you've got, the higher your power level will be. I'd thought about just taking the notion of psionics as written in the Diaspora rules as a Stunt that lets you swap a skill
for another skill, and just changing that wild-card skill from Psionics to Assets.

My second idea was using it as is, and just saying that you can't buy Psionics skill at a level above your assets without some explicit Aspect ('Exiled Heir-in-hiding' or the like). This version feels like it allows for more, and more interesting, stories than the first one, and also makes powerful characters (scions of the various Houses) have to invest some real character resources in being both wealthy/powerful and being hereditarily psionic instead of the cheap freebie of the first idea.

But both of these made me wonder - is just putting Assets as your Apex (or close to it) skill sufficient to model the kind of semi-feudal overlordship I'm trying to convey? For people who aren't familiar with the game I'm emulating, maybe a decent comparison would be the head of a House in "Dune." What's the thing on Duke Leto's character sheet that lets us know he's head of House Atredies, and lets him act
as such in game terms? Is it just Assets: 5 and an Aspect (Imperial Duke)? Should something as powerful as "Head of a powerful, militarized Royal House" be a full-fledged Stunt? Or am I missing something? And how would we model someone further down the line of succession? What's on Feyd's character sheet, other than the Aspect 'Tiny Leather Underpants?' 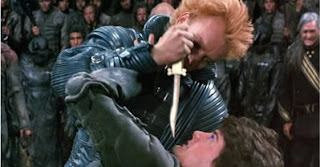