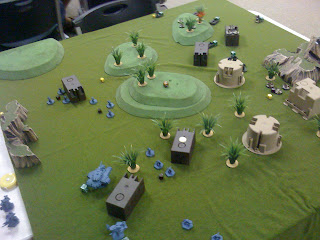 A rare Tuesday night game, with Britt running a modified version of my SRA "Sleepwalkers" while I debuted my primed-but-still-unpainted CEF oppressors.  CEF was fun but I really need to figure out how to play them.  Also as much as I love Frames - and I really, really do, all I thought when I airdropped them in was that I wished they'd been a light hovertank squad, or even a second heavy hovertank. Due to a variety of reasons that all boil down to 'I forgot to take more pictures,' this is the only picture of the game.  We had to call it early, but I think Britt was in a slightly better place to complete his objectives than I was.  Airdropping my frames didn't work as well as I'd hoped; I think they'd have worked better just charging across the board.  Similarly I need to make someone other than my speedy little hover scout car the Army Commander; I was too worried about losing him to really get the most out of the mobility the damn things have.  We also confirmed what I'd discovered running the SRA against Brandon's CEF - FLAILS do not like field guns.  Nope.  Not one bit.
The following were pics from a really interesting game I played with the trusty Sleepwalkers against Justin's new-ish Airborne Dragoons list two weeks ago.  Since I've waited so long my memory is a bit foggy, so I hope Justin will help fill in some of the gaps in the narrative here.  Comments are below the pic they refer to. 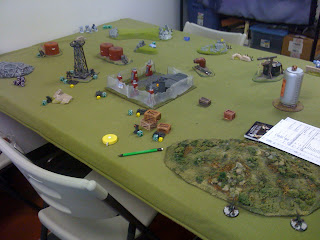 We set up on the long table edges; our victory conditions were slightly overlapping.  I needed to get my GP squad into Justin's deployment zone (Breakthrough), hold my own (Blockade) and kill his infantry command squad (Assassinate).  If I remember correctly, Justin needed to kill my GP squad (Wipe Them Out) and Breakthrough into my deployment zone, and something else I can't remember. 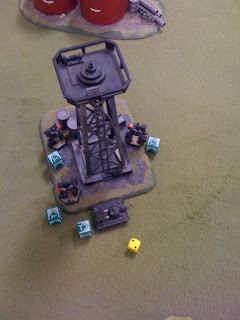 This isn't really illustrative of anything as it's part of my initial setup; I just liked the pic. 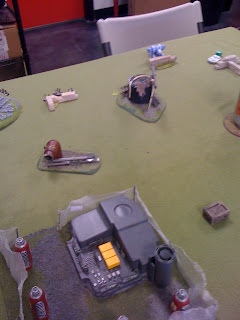 Here some of my own WFPA infantry volunteer to help out Justin's Norlights.  This was also the first time I faced his Mammoth, which I was scared enough of that I bought an Airstrike with my support points with the express intention of blowing it up. 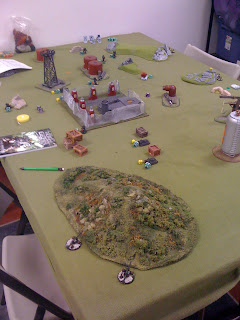 At this point, my two Hun squads begin to push forward on either side of the power plant.  God, I love those Huns. 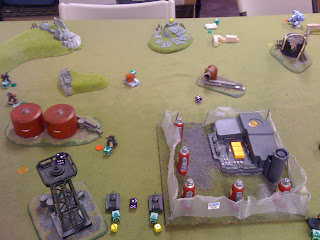 This is why I love those Huns.  Justin tried to dash his Bandit Hunter Klemm (a light tank) past them, but opportunity fire with the Light Laser Cannons made pretty short work of that.  At top right you can see that my airstrike didn't kill the Mammoth, but it has seriously damaged it (hence the orange damage token).  Meanwhile, his infantry have been showering my GP squad with light mortar fire, doing some real damage to the Command Jager.

If I remember right, there was an exchange of fire here where Justin rolled three sixes for his mortar team - the equivalent of an attack of eight! - which unfortunately had to get called back due to too many actions taken by the infantry that turn, or something.  I'll take this moment to say that it's always a pleasure to play Justin, and he is relentlessly honest about stuff like that; I didn't even realize it until he did and pointed it out.  While you read a lot of stuff online about cutthroat 'win-at-all-costs' types in the minis hobby, I find they are few and far between.  Many, many more of them are great folks like Justin. 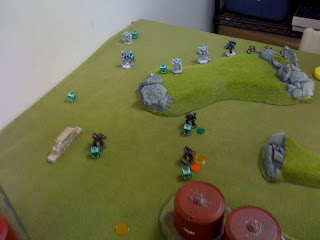 This is now turn three, and Justin's Airborne Dragoons dropped in right in the faces of my GP squad.  I'm trying to run them full-speed into the backfield because if they stop or change course too much they simply won't have the range to make it into his DZ for my Breakthrough mission.  Justin's Dingos and other gears proceed to wreck face. 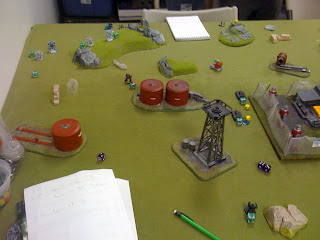 See those two puffs of grey smoke? That's the aftereffect of thoroughly wrecked faces.  I did manage to make a 'dying declaration' bazooka shot that knocked one of his para-gears down to Light damage, but it didn't matter.

At this point it was getting a bit late, and we were finishing turn three, when Justin announced that he was pretty sure I'd won on points.  By using his Airborne troops to crush my GP squad, he'd placed them so far back on the battlefield that he could not get them, or any of his other troops, into my DZ for his breakthrough goal.  My successful Assassination and Blockade meant I'd won, something like 3 to 2?

It was a really great game.  I felt a bit cheap about using the Airstrike to wound his Mammoth, but that thing was scary.  My Huns did better than in their past few games, but my field guns in the back corner of the board were hugely ineffective.  And my poor GP squad was basically dead once I'd rolled them into their Breakthrough role.  Still, it was a ton of fun.

There was also another game of Battlefleet Gothic with Rory in there someplace, but I can't find the photos.  Separate post for that if I do, I reckon.
Posted by Ken Coble at 1:49 AM