So Rory and I are on game four of our campaign, and since I finally got some merchant freighter minis (literally the day of the game) Rory assembled them while I finished my campaign paperwork and then we played the (honestly randomly rolled!) Convoy Escort scenario.  As the attacker, my forces were randomly determined, at which point I realized that none of my existing Chaos cruisers were cheap enough to fit under the 200 point allowance per cruiser I had a chance to roll up.  While I did have two new Chaos cruisers, still on the sprue, I just proxied in an existing ship for my shiny new Murder-class cruiser, the Blood of the Ram.  I also got two escort squadrons and a few ordanance markers.  Rory fielded two light cruisers and a small squadron of Sword-class escorts.

We actually played the first several turns of the scenario totally wrong*, so we reset it and started again.  Good thing we did, because what was otherwise going to be a perfunctory trip across the long axis of the board for Rory's merchant ships turned into what we both agreed was the most fun game of BFG we've played thus far!

*: my forces were deployed as 'blip' markers on the board, that would activate whenever one of Rory's ships came within 30cm.  What we didn't realize in our first attempt was that once per turn, I was allowed to voluntarily deploy one marker.


Rory moves his convoy onto the board, close under the guns of his Imperial Navy detachment 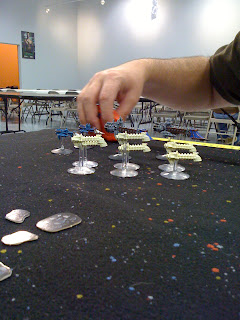 The convoy ducks behind an asteroid field; meanwhile my deadfall torpedoes and the 'Scopophiliacs' try to draw Rory's escorts into a fight 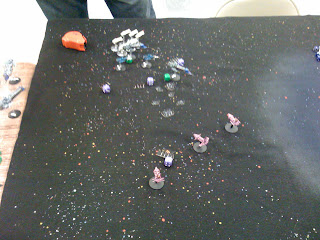 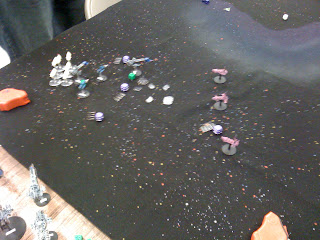 Blurry, but you can maybe see that I have driven one of the 'Scopophiliacs' right in among the freighters, while the other surviving member of the squadon comes in from the rear.  It was at this point I began to realize the freighters were not as fragile as I had thought they would be; at least not to escorts on 'Brace for Impact.' 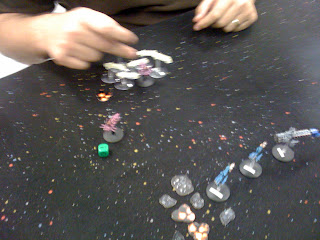 In fact, if memory serves this was around the time I started to realize that the massed fire of six freighters was actually sufficient to be a legitimate threat to other escort-class ships. 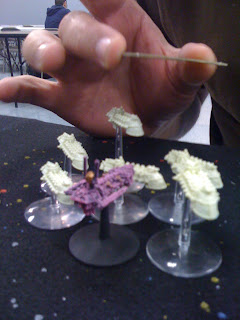 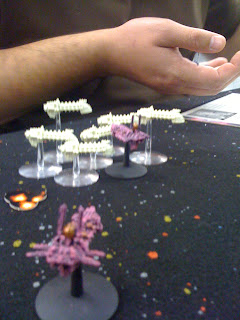 Meanwhile, I chose to activate the (proxied) Murder-class Blood of the Ram before I ran out of time and real estate to use her. 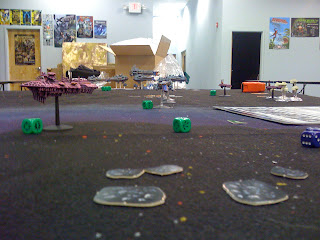 Nearly immediately I crippled one of Rory's light cruisers, and soon after that set the other one on fire, but I'll spoil the surprise by letting you know that I didn't actually manage to destroy either one.  You can also see that by now I activated the 'Objectifiers' squadron and drove them into the convoy. 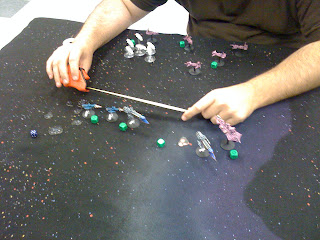 I had a clever idea about flying them through the freighters, guns blazing, and then turn hard to port to take on Rory's Sword-class escorts.  The turn part worked, but I failed to get the giant stack of kills I'd planned on racking up. 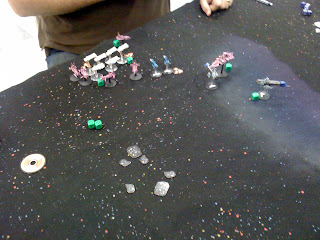 Somehow I did finally manage to score a kill on a freighter.  Meanwhile the Swords, and the freighters themselves, started hammering my escort-class ships.  I know the freighters got at least one kill; hopefully if Rory reads this he can refresh my memory as to whether they got more than that or not. They certainly weren't as toothless as I'd expected! 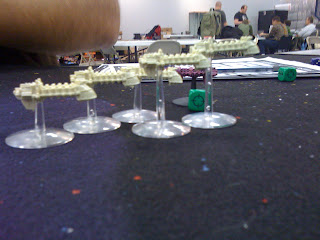 So eventually my escorts, wasting their time being stuck on 'Brace for Impact' weren't doing any damage, and Rory broke for the edge of the board.  My last hope was to pull the Blood of the Ram across something like half the length of the table.  But since I had a deadfall torpedo blip waiting directly in the path of the freighters I thought I still had a chance.  Meanwhile, the single Sword-class that kept dogging the tail of my Murder-class cruiser managed to take my prow weapons offline long enough to prevent me from taking 60cm shots at the fleeing escorts.  It was coming down to the last turn... 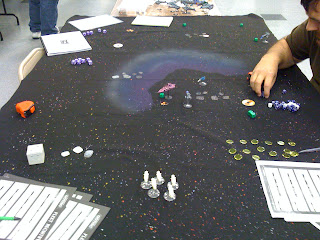 At which point my 5-strength torpedo volley passed right through two of the freighters without scoring a single hit.  I ran the Blood of the Ram up as fast as I could, but could only take out one frieghter with my freshly-repaired lances.  The convoy diverted all power to their puny engines.... 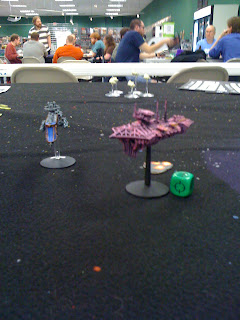 And right after the above picture, Rory successfully put them on 'All Ahead  Full' orders and rolled something that nearly doubled his puny 15cm speed.  All four survivors made it off the other edge of the table; the Imperial filth got their precious supplies after all.

We had a blast playing this scenario.  It's a crying shame that GW doesn't sell their freighter minis any more; these are the Forge World ones that ostensibly represent armed merchant freighters, but I consider myself lucky to have found them on eBay from a US seller so as to avoid overseas shipping.  Still, I'm on the look-out for the un-armed freighter minis as well!  If any of my intrepid readers are sitting on any that they're not using, please drop me a message...