Not much of a batrep here. Poor Britt spent at least ten minutes setting up all his Soviet Strelkovy Battalion, digging in and prepared to fight tooth and nail for the Rodina. I cleverly (hah!) diluted my already numerically weak forces even more by using the German "Kampfgruppe" rule in an attempt to gain superiority in maneuver elements. The plan for this game was to also introduce artillery, so that I could start to learn the FoW rules for it; my force had some 10.5cm cannon, and Britt was fielding the dreaded Katys. You can even see the artillery template on the table, here at the end of turn one when things were already falling apart for me: 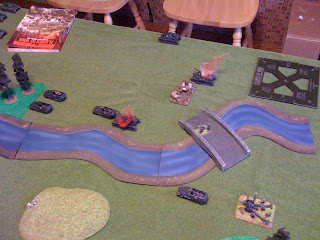 I basically wasted my 105s on Britt's light tankovy company - miraculously getting a kill on one of them, but not slowing them down at all. Instead they forged ahead and began blowing the jeepers out of the two units I was trying to roll up my right flank, killing two out of the three Panzer IVs I had left after peeling one off for a singularly ineffective Kampfgruppe on the left flank. 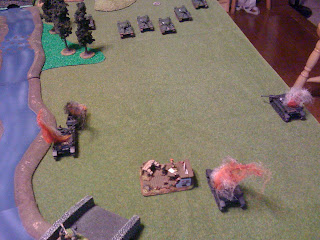 The next turn it got worse, as the last Panzer IV got hosed by the remaining six T-70s (I think that's what they were) of Britt's Tankovy company. My Gepanzerte Panzergrenadier platoon took a hit too, losing one of their three halftracks; and if memory serves they failed a morale check and ran the hell away in fine Teutonic fashion, instead of occupying the woods commanding the fordable portion of the river as initially planned.

Meanwhile, on my left flank, my kampfgruppe and another platoon of panzergrenadiers (mounted in Kfz 70 trucks) had bogged down under withering MG fire from Britt's Soviet infantry, who were dug in like ticks all along his deployment zone, as well as sporadic bombardment from Stalin's Organs (I guess that sounds less dirty in German? maybe not), the annoying Katyushas. 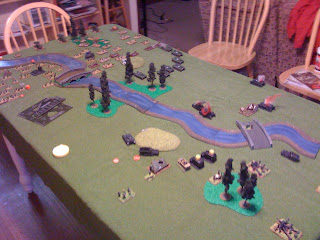 By this point I'd killed one tank, lost virtually all my armor (the tank I had left was pinned since the infantry carriers in the rest of his Kampfgruppe were pinnable), and had basically nothing that could realistically oppose Britt's virtually unscathed horde of valiant pesants, so I threw in the towel and we played a game of Space Hulk (which will eventually get a writeup here, despite arguably being a boargame rather than a wargame).

Wrap-up? I made some pretty big mistakes, and did some abysmally bad shooting with my tanks prior to getting them all shot out from under me. I also totally misused my arty; while it wouldn't have made too much difference, I'd have been better served by using it to shell Britt's densely-packed infantry, and saved shots on his tanks for later (presumably shooting over the open sights as they came barreling down my right flank, but no matter). But basically, Britt rolled through me like the Bluesmobile through the Illinois Nazis.