I am in a mad dash to get current before Monday, when the plan is to get in some Flames of War and some Warhammer 40k Combat Patrol; so I'm going to try and churn these things out pretty fast. Fortunately, this one will be short, since it was a total learning/practice game. Britt brought a Vindicare Assassin (basically a super-bad-ass sniper) and two ten-strong units of Sisters of Battle. I brought two eight-man squads of Khorne Berzerkers. We lined up on opposing table quarters with no real cover and started rolling. 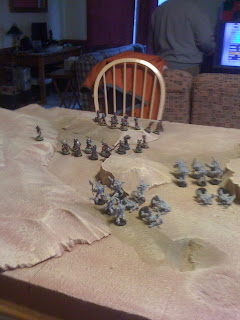 Already I'm taking some pretty big casualties, despite being in power armor. Fortunately (and cheesily) Berzerkers effectively don't take morale checks, so I didn't really care; I kept popping bolt pistol shots into the groups, not really caring if they landed or not since I was just desperate to launch an assault. Unfortunately I inadvertently cheated, having my right-hand unit of Berzerkers both run and assault during their second turn. While I think I was probably in charge range anyway, this could have made a big difference - either another turn of rapid bolter fire, or a spoiling charge, might have changed the outcome pretty drastically. 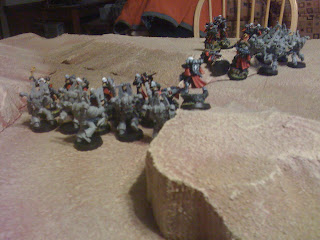 The results of my perfidious behavior - each of my squads launched an assault on one of Britt's squads, and the Berzerkers' simply goofy amount of attacks (three, four on the initial assault) took over. Britt's Vindicare keep shooting into the melee, but there wasn't much he could do at one kill a turn. The left-hand Berzerkers killed their way through their victims, and prepared to turn on the Vindicare while their slowpoke comrades kept chainswording their way through the remainder of the Emperor's most devoted servants. 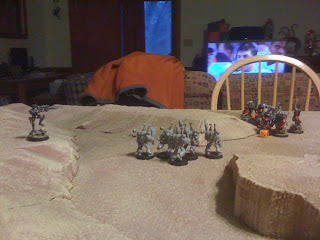 Eventually the surviving Berzerkers took down the Imperial Assassin with a flurry of bolt pistol fire, which seemed anticlimactic but was probably smarter than giving him another round to pinata-stick their noggins. 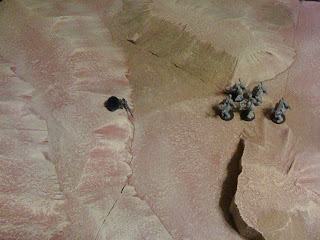 If, at this point, you find yourself feeling bad for the Sisters of Battle, bear in mind that this act of martyrdom would apparently piss the rest of the chapter off to no end, as they prepare to beat the whiz out of all comers for the rest of these batreps (and possibly the foreseeable future).
Posted by Ken Coble at 10:34 PM