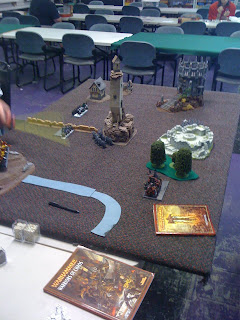 So I finally got some of my WFB Slaaneshi Chaos guys assembled, and headed up to All Fun and Games in Apex to play my first two games. I guess technically they weren't my first two games, since my old friend Steve got me to play a game or two before, but that was several years and nearly as many editions of the rules ago, so practically these were two newbie games.

My opponent was a tremendously nice (and patient) guy named Andrew, who went out of his way both to be helpful with my numerous rules questions, but who also lent me five of the Brettonian knights he was using to proxy for his Dark Elf Cold One Knights so that I could proxy my Chaos Knights, who I'd wisely left in a separate box on the countertop when I left.

I didn't really take any notes, or even more than this one picture, but I have to say that I think I'm going to like WFB a lot, and I'm fairly certain I like it (rules-wise at least) more than 40k. Mechanically it seems less fussy, and yet there are more interesting options and things to consider. I also think the mission selection portion of the WFB system is way better than 40k's is. Don't get me wrong, I still like 40k and want to give it a shot again in the near future as well, but WFB really knocked one out of the park in my opinion. I really need to buckle down and get these Chaos guys assembled and painted so I can start on my Dwarfs for the mini-campaign Steve, Britt, and I discussed last fall!
Posted by Ken Coble at 3:50 PM