Betrayal and Conspiracy, Sacrilege and Heresy 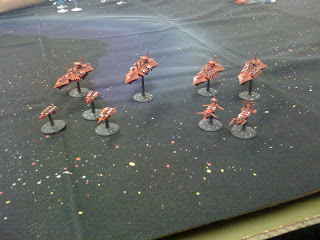 And that's them, from left to right - the Word Bearer cruisers Betrayal, Conspiracy, Sacrilege and Heresy (named for four of the Virtues of Chaos, and also from the Steve Earle song I've been riffing on in my titles for these BFG posts).  Escort squadrons are the "Conjurers" and "Concubines"; the "Conquerors" were not on the table tonight.  Battlefleet Gothic, GO!

For our starter game, I fielded the Sacrilege and Heresy with the two "Conquerors" as escort ships.  As a Chaos fleet, I had to spend 50 of my 500 points on a Warmaster with Leadership 8 and one re-roll, not a great bargain at this small a price, and doubly annoying when I actually rolled a Ld 9 for my flagship which the Warmaster (frothing at the mouth about the Will of Chaos, no doubt) actually reduced by one.  Not an auspicious start. 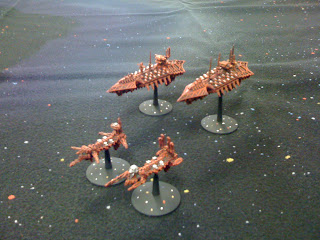 For our first game (for both me and Rory) we figured we'd fight on an empty board, just to get the hang of moving, shooting, etc.  Oddly enough when we placed astronomical features in our second game they wound up having no real effect, but I'll cover that when we get there.  In any event, we both basically went straight in on each other from turn one, which was probably a better idea for Rory's Imperial Navy fleet than for my longer-ranged Chaos list. 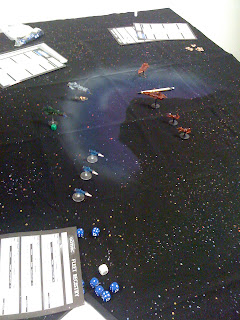 We got caught up in both the fun of the game and the need to keep looking things up in the rules, so basically I didn't get many more pictures of our first game.  Just as well, as Rory beat me pretty badly.  In the picture below you can see that he's managed to split my two cruisers with one of his. The triangle 'blip' counter is what we were using to indicate that my flagship was already crippled (lost half of its hits). 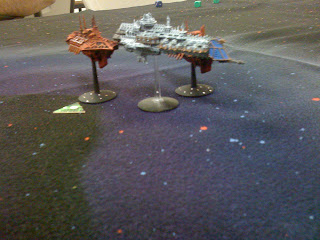 From above you can see that Rory actually winds up only being able to broadside my less-damaged cruiser. 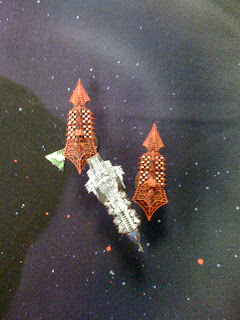 After delivering a real pounding with that broadside, Rory moved his Sword-class escorts in for the kill.  The best thing that happened for me in this game was that when the Heresy exploded, it vaporized one of the Swords as well. 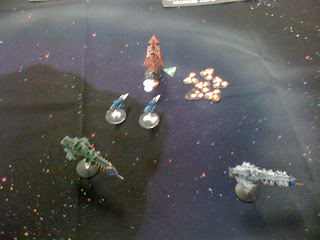 At this point I took a few minutes and found the rules for disengaging, which the Sacrilege appropriately did.  A total beatdown, but we basically felt like we had a handle on the rules.  So we went to dinner, came back and figured out how many points everything Rory had was worth, then I slapped together an equivalent amount of points. Basically this meant adding the Betrayal to the fleet and swapping the "Conjurors" for two of the "Concubines."  Conspiracy had the night off, I guess. 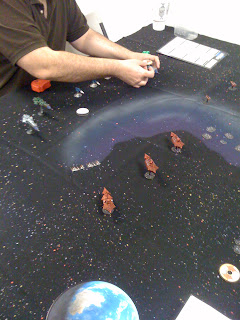 I do think we need to go to the 'one person places, other person picks deployment' method of setting up the battlefield, because basically we got a whole bunch of nothing as far as I was concerned.  Then again, maybe with larger fleets we'd have had the time or inclination to try and use the asteroid fields and planets a bit more.  As it was they just wound up being a neat box that we fought inside.

Anyway, the furball you see in the next picture was probably as close to doing well as I got all night.  The two blast markers on Rory's cruiser indicate that his shields are down; unfortunately if memory serves all I got for this effort was a single hit.  Meanwhile you may notice that I'm already down one Concubine.  Hard times for an honest Chaos Warmaster. 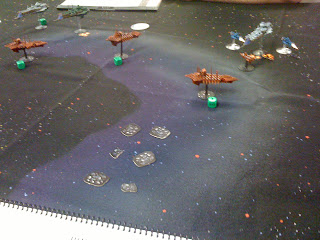 The purple die set to six pips is what we were using to indicate crippled ships. That should tell you how things are working out for me. 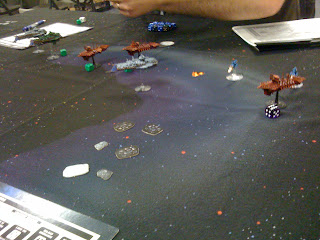 Unfortunately by now we were running late and trying to finish so Ron (our friendly store owner, of The Game Connection) could lock up, so no more pics.  Which means that the amazing final turn - where Rory took my healthiest ship (the Betrayal) from barely hurt to dead with a massive barrage of fire and a lucky boxcars on the Critical Damage table - or the final Ordnance phase, where the Betrayal's now-orphaned bomber flights did the exact same thing to one of Rory's cruisers!

All in all we had a blast, and have basically both agreed that a campaign (using the rules right there in the basic BFG rulebook) is the next order of business.  Battlefleet Gothic is a really wonderful game; it's a shame that GW has sidelined it like all the other 'Specialist Games.'  Both of us and Ron felt like a re-release of the old BFG box set - four each Imperial and Chaos plastic cruisers, rulebook and cardboard gubbins - would have sold far better than the beautiful but intimidating Dreadfleet did.  Again, without trying to fish for compliments or pity - I'm a pretty bad, or at least inexperienced, painter.  But these minis just pop to life with the simplest of treatment - three layers of drybrush and a tiny bit of detail, and you're ready to fire up the Geller Fields and brave the perils of the Warp. What a great way to get people into a minis game; what a shame they don't sell the box anymore.

EDIT TO ADD: halfway through this writeup I started getting my Chaotic Virtues, and my ship names, scrambled up.  I really need to make nameplates for them.
Posted by Ken Coble at 1:29 AM