Two 500-point 'learner' fleets for Battlefleet Gothic. These guys are Chaos, painted up to be part of a Word Bearers fleet. 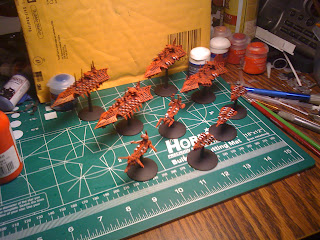 The paint scheme is painfully simple, since I'm a painfully bad painter. Basically a three-layer drybrush (Mechrite Red/Red Gore/Blood Red) over black primer, details in silver, engine glow and ports in Iyanden Darksun (GW's now-obsolete yellow foundation paint). After these pics I went back and put some dots in white, red, yellow and blue on the bases to give them a 'starfield' look and hopefully make them a bit less drab. The real problem will be getting the names on these guys; instead of trying to freehand them on the bases I may make nametags for the ships and tack them to the base with a dab of PVA glue.